South Carolina legislators have re-entered the abortion foray with a new bill asserting that personhood “vests after fertilization.” The bill states that “personhood is God-given, as all men are created in the image of God.” The right to choose or the right to life has been heavily debated since the passing of Roe vs. Wade and has potential to become one of the determining factors in how residents vote in upcoming statewide races.

The bill has been introduced by 21 senators predominately male, with 1 female legislator, and 1 Democrat.

The Personhood of South Carolina website, a non-profit to promote the bill states that, “While we understand and sympathize with the hardships a mother faces in these situations, we are against abortion for the same reason we are against rape — it is a violation of the rights of another person; in this case, the preborn child. We do not believe that a rapist violating a woman’s rights is grounds for the woman to violate the rights of her child.”

The website refers visitors to read the story of  Rose Duncan, who was sexually abused during the ages of 14 and 15 years old. She insists that she wished to have the child, regardless if it was conceived through rape. “My beautiful son is why, when I hear about “pro-life” beliefs, “except in the cases of rape,” I do more than cringe: my heart aches!” Duncan states in the article.

Duncan’s story is heartbreaking, but she does make it clear that she was always pro-life and knew she did not want to terminate her pregnancy. Her story, however, does not summarize all rapes. Her attacker was known, later arrested and she had personal involvement with him. Opponents to the “rape is a legal form of conception” belief argue that one cannot assume that all women, when faced with a pregnancy after rape will view it as a “blessing from God” and will simply switch to “mother mode.” In some states mothers face their attacker frequently, who have legal parental rights to the child.

Women’s Rights and Empowerment Network (Wren) of South Carolina, an opponent of the bill argue that personhood laws could impact mothers who wish to carry a baby to term. They could be arrested, or forced to participate in medical procedures against their will. Wren’s video on YouTube shares stories from across the nation of similar personhood concerns.

February 20th, Governor Henry McMaster praised the bill via his Facebook page, asking for it to be passed. The responses were mixed, with some asking what happens to the welfare of the child after birth, or stating that they felt that gun ownership allowed more rights than that of a woman’s body. One constituent asked why she could not claim the child on taxes until it was born through birth. Many responses from state residents asked why there was a focus on abortion and not on protecting children in schools from weapons, in reference to the school shooting that occurred in Parkland, Florida.

February 24th, Personhood of South Carolina posted a video asking supporters to call and thank legislators for their support in “ending abortion so far.” The bill has since passed it’s first round of votes, and official debates on the state floor will begin. 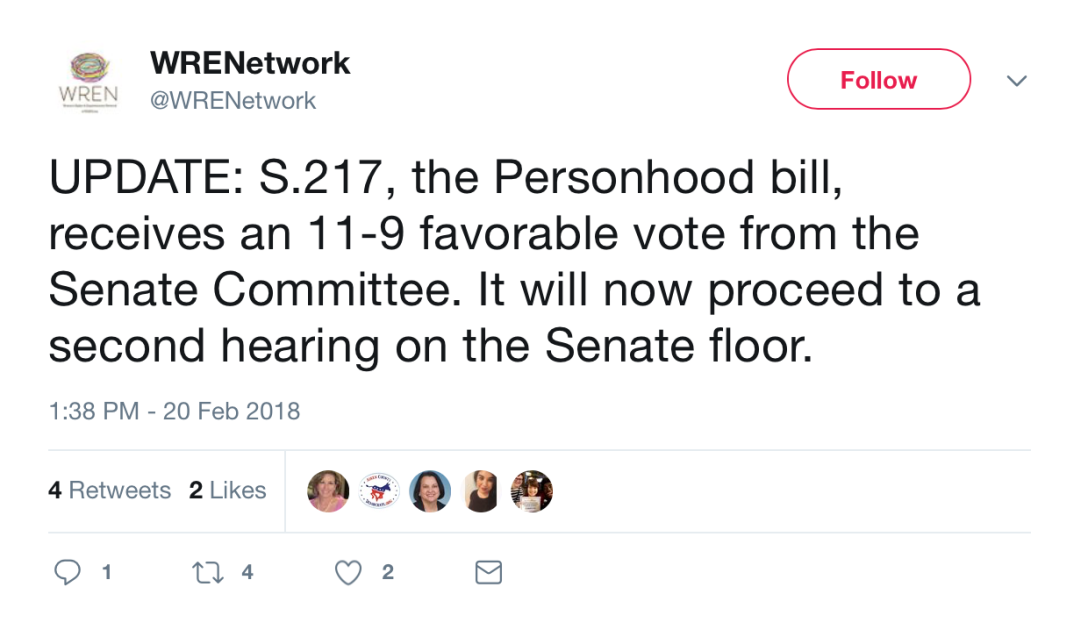 0 thoughts on “The Problem With Personhood Laws”